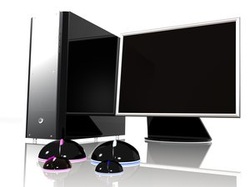 Computer have read heads, Cells do not
The Question of Data
The data origin question must be answered
So where did all this data come from?  Now that the science is done and we understand the cell's basic workings, we can see that Someone or something must have been a pretty good programmer.  Who or what created the elaborate "cell program" in the first place?

A closed system
A cell only has reading heads for DNA, and no write heads unlike your computer that can read or write data.  A cell cannot add information to the DNA - there are no structures to do so.  This is called is a closed system.  A cell can replicate its existing data and itself to make the real-life things we observe like plants, trees, fish, birds, mammals, elephants, and whales, but it all begins with one cell running the correct code, just like the software used to view this page right now!  The cell and DNA code are interdependent and cannot exist without the other.  Clearly, natural selection does operate, but uses pre-existing code.  This is a design feature, not an accident!  Although mistakes may develop, new code is never added.  Actually Darwin thought information could be acquired within a generation and passed on.  We now know this is in error, or otherwise evolution would have been proven 30 years ago when equipment became available to view cell operation. No such bio-equipment exists in a cell.  Either way intelligence would need to be involved! 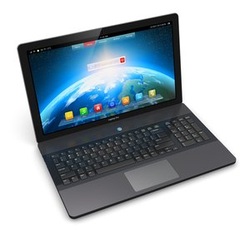 Ever see Win 8 come from Win 7?
Mistakes don’t equal improvements
If you depended on 'mistakes' to update your software, (as evolutionists now claim happen in the DNA), no matter how many lifetimes you waited, would you believe Windows '7' could become Windows '8'?  No, we all agree that would be impossible; code work requires planning and logic written into a progressive and convergent working system. Software doesn’t add good code by operating over on over in experience, we know it actually tends to "crash", not improve, like mistakes accumulating over time degrading DNA, not improving it as we see in reality. (see Evolution Falsified I - Genesis Alive! where 40,000 generations of fruit fly's exposed to many environments failed to produce useful mutations!) This is true in living systems also, reproduction over many generations adds 'mistakes' to genes, not positive features. (e.g. 'genetic diseases') A well known geneticist, Ayala, postulated that due to this 'genetic load', humans may only live 300 generation's (about 10,000 years) before a complete breakdown would occur in our genes and our species fail. Remember, it’s the same code language and "hardware" (the cell) across all living things, from Algae to Man, so how can this all survive millions or even billions of years old as evolutionists claim?  Could it be the Earth and life have been in existence for a far shorter time than evolutionists tell us?  See the Time topic in this series for more The Question of Time - Genesis Alive!

For instance, if man lived on earth at conservative population growth rates, more than 10x24th people would have existed in earth, but that's more bones than the entire Universe could hold!  Most uniform estimates indicate our planet is less than 10,000 years old.  The recent finding of T-Rex in soft body with intact blood cells is very supportive of a young and vibrant time-frame of Earth and Creation, not an unimportant tick of some billion year clock.  You are special and important to God! 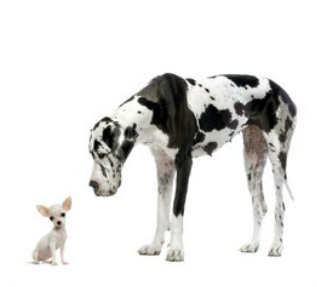 Both are dogs, related to an ancestor that had pure genetic code
Variation within species
Creatures become more dominant in order to survive by using variations in size, color, etc., but these adaptations are already built into the DNA code of one animal kind.  This is not the same as creating another complete kind of creature from the environment.  In addition, as the DNA sits within a cell as an independent operating entity (and has been so changeless, since the since the beginning of biological time), then how can chemical to cell evolution explain this? How could DNA and the cell factory it controls evolved in identical paths and maintained a communication convention, and a very elaborate one at that, and still be functional for life to move forward in common decent reproduce? (Opposite sex mates must have accidentally evolved at the same time)! This concordant interrelationship and lack of cell mechanism for it prohibit anything ever evolving.  The truth is the life kinds, like the dog type for instance, had a purer code with more variation range that distributed into the various dog kinds we see today.  That's not evolution, that's good planning and design!
If the cell and DNA were a product of dead chemicals and time, wouldn't it make sense that Cells should be evolving and changing too?  Fact is, they haven't!

The truth is this unchanging interrelationship is absolute and proven at the most basic understanding of cell operation.  How could ALL life be based on ONE code system if evolution is driven by random self-directed nothingness, changes and mutations? That's a completely absurd notion.  If evolution was at work, we should see thousands of code types and varied mechanisms, but the fact is we only see ONE.  Now that the microscopes are bigger and the new science is in, the evolution foundations are cracking up fast.

More bad news for mutation theory; an important 2013 study found even more complexity in DNA; markers were identified along the DNA strand that act as sign posts for along the DNA strand, used when the cell calls up data code as needed, similar to the way your hard-drive accesses files on differing segments of the memory banks.  This capability really makes DNA "3 Dimensional" the study states. (1)  The more we look into cell operation with all the technology man can muster, we see more complexity and no possibility of life's self-creation or by mindless action.  So if you were driving down a road and saw sign posts, would you deduct intelligence was missing form the area?  No.
1. The genome’s 3D structure shapes how genes are expressed — Garvan Institute

What now, Duon's? a second control code (e.g."dual") overlapping the primary construction code?
"Since the genetic code was deciphered in the 1960s, scientists have assumed that it was used exclusively to write information about proteins. UW scientists were stunned to discover that genomes use the genetic code to write two separate languages. One describes how proteins are made, and the other instructs the cell on how genes are controlled. One language is written on top of the other, which is why the second language remained hidden for so long."  “For over 40 years we have assumed that DNA changes affecting the genetic code solely impact how proteins are made,” said Stamatoyannopoulos. “Now we know that this basic assumption about reading the human genome missed half of the picture. These new findings highlight that DNA is an incredibly powerful information storage device, which nature (?) has fully exploited in unexpected ways.”(1)
So what we have here is a MAC/MS like super code tha'ts been made by a  billion years of accidents.  Really.  Even the utterly committed evolutionist's were "stunned".  Is any more need said about the complexity of the DNA and the cell?  Intelligence + Design acting on matter = Life. Defense rests.
1. Genome Uses Two Languages Simultaneously; Try That Yourself Sometime, Why Don't You - Evolution News & Views